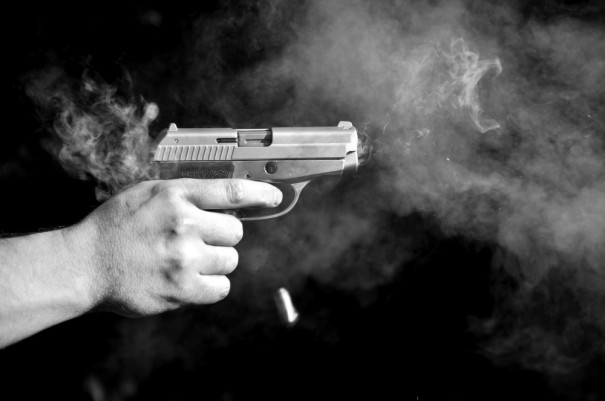 Two man argue on a street. Shouting can be heard. A shot is fired. Police officer arrives. One man is dead on the ground. The other man is standing over the body holding a gun. No witnesses.

Two men argue on a street. Shouting can be heard. A shot is fired. Police officer arrives. One man is shot, but alive. The other man is standing there holding the gun. No witnesses.

With the help of lobbying efforts of The National Rifle Association and the American Legislative Exchange Council, the Stand Your Ground Law was passed in Florida in 2005. Before this law, self-defense law in Florida already included the Castle Doctrine, which states that a person has no duty to retreat when their home is attacked. SYG takes it a step further and states that a person has no duty or other requirement to abandon a place in which he/she has a right to be, or to give up ground to an assailant. And that place no longer has to be their home, but only where they stand. And ultimately, it comes down to whether someone had a “reasonable fear of imminent death or serious bodily injury. “

The question is, who determines whether or not that fear is reasonable? And is that fear without prejudice or provocation? Before, a perpetrator had to go through the court system to determine whether a homicide was justified. The SYG law allows that determination to be made by police or prosecutors asking three simple questions: 1. Did the defendant have the right to be there? 2. Was he/she engaged in a lawful activity? 3. Could he/she reasonably have been in fear of death or great bodily harm?

Since 2005, studies have shown that the rate of justifiable homicides in Florida tripled. The Tampa Bay Times in 2012 reported: “of the nearly 200 cases, 73 percent of defendants invoking the law faced no penalty when a black victim was involved. The figure dropped to 59 percent when it was a white victim.” The interpretation of the law seems to be ambiguous when it comes to the determination of this third question and allows room for prejudice when asking what is reasonable when it comes to fear of death or great bodily harm.

For those that want this law repealed, it is not an anti-gun agenda. What the Dream Defenders, for example, are asking for is to: 1. Eliminate automatic immunity from prosecution without judicial review. 2. Require proof of self-defense claims and establish a burden of proof that does not adversely impact survivors of domestic abuse.

What kind of law does not require due process in the court of law, requires the victim to shoulder the burden of proof and allows for extreme prejudice?

Because of public outcry, the Florida State Legislature will be considering the repeal of Stand Your Ground in these upcoming months. Let us see if they will answer any of these questions.

5 comments on “The Prejudice of One Law”