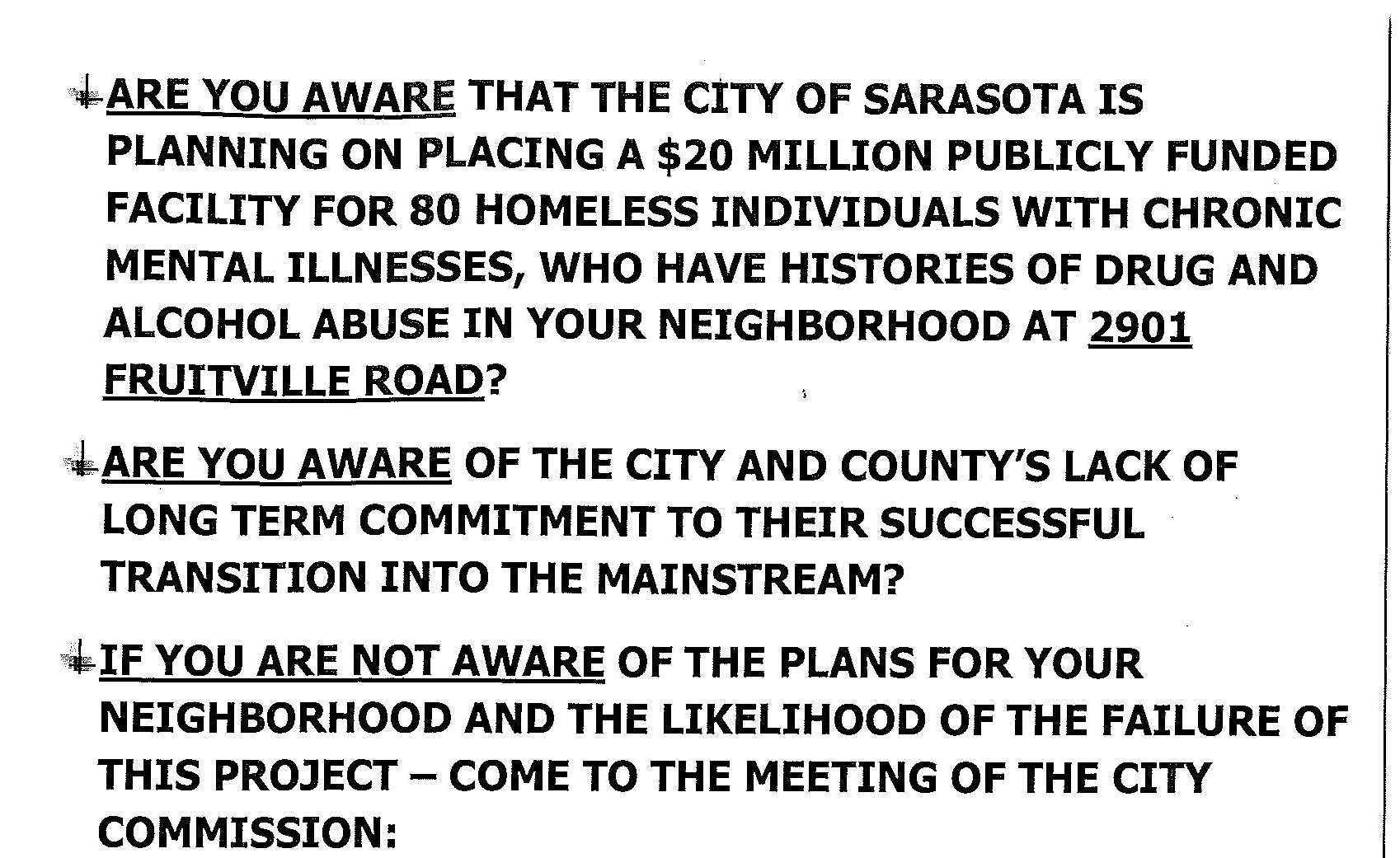 Update:  Arbor Village will proceed as planned and provide low-income housing to the City of Sarasota residents. A 3-2 vote to allow it to go forward on Monday night at City Hall (Brody, Alpert, and Ahern-Koch in support).

The chamber was standing room only with the testimony lasting4.5 hours.  A mostly Hispanic group of neighbors attended the meeting, having concerns created by the flyer handed to them as they came home from work.  Undecided about the project, they asked the city commission to hold a full hearing so they could voice their concerns brought on by the testimony of Attorney Dan Lobeck.  It was reported that in addition to Pizza, drinks, and transportation called out in the flyer shown below, the neighbors were also given $25 gift certificates to attend the commission meeting.

Mr. Lobeck represented the opposition to this project. Continuing the message of “these people,” he suggested that there would be “violent criminals” and “sex offenders” who will be able to “roam freely in the neighborhood.”  In the end, the main focus of his argument was the lack of a  fence that surrounded the entire property, not just on three sides, and that there was no place for “these people” to “congregate.”

Along with Sarasota attorney Bill Merrill and civil rights attorney, James K. Green, Blue Sky CEO, Sean Wilson, tried to quash the unfounded fears of the neighbors.  Speaking in Spanish, he assured everyone that he will be just a phone call away if they needed him.

When asked by the commission why he did not hold a town hall, alerting the neighbors of who would be living in his development, Scott Eller, CASL Executive, explained the law prohibits the discriminatory nature of singling out people by their disability. The very nature of informing the neighborhood of the nature of Harbor Village would create a reaction that was unintended.   In addition, no other assisted living facility would be asked to submit itself to that level of scrutiny.

Commissioner Brody called Mr. Lobeck out on his categorization of the potential residents and reminded him that Arbor Village is “not a prison” and the residents “are free to walk through the neighborhood to the bus stop like everyone else.”

Commissioner Alpert questioned Mr. Lobeck, asking the developer was to place a few picnic tables around the property – would that satisfy his fear of not having a place for the residents to “congregate.”

It was exciting to see so many people engaged – even if a lot of them were brought to City Hall under the fear-mongering tactics of the opposition.   I am hoping, because of last night, they will stay engaged. A shout out to Hagen Brody and Liz Alpert for their calling out the terrible bigotry that we witnessed last night. It was inspiring to see them both in action.

*Photos of the evening are at the bottom of this page.

A long history of housing discrimination has been woven into the identity of what otherwise would be considered a wonderful community. The long struggle with wanting to do the right thing and keeping other people’s problems at a distance has become the bane of Sarasota.

Sure, we want to help.  Help in the form of writing a check, attending a function, and donating old clothes is perfectly fine, but please don’t ask us to open our community to just anybody.  We got here by our own bootstraps and earned everything that we have acquired.  No one helped us.  After all, the good book says, “God helps those who help themselves.”  And that, ladies and gentlemen, is why most of the good people of Sarasota can sleep peacefully tonight in a nice bed and a full belly.

What people seem to forget is –  it’s one thing to ask someone to help themselves, it’s another thing to put up roadblocks that stand in their way.

This Monday night, April 2nd, 2018, the Sarasota City Commission is holding a hearing about an affordable housing project called, Arbor Village.  Until now, the builders were expecting this to be a welcomed project. Receiving a “thumbs up” from 4 of the 5 commissioners, and a 5-0 vote in favor of it from the planning commission, there was no concern for what was to come of Monday night.

That is until someone decided to scare the neighbors by passing out inflammatory flyers that said, “location of facility for 80 homeless individuals with chronic mental illesses [sic] who have histories of drug & alcohol abuse… coming to your neighborhood soon!”  Yes, someone has created a boogeyman.  The irony is, without the slightest concern about the truth, or the damage that is being caused by the discriminatory flyer, that person will be able to sleep soundly in a bed tonight.

This project is not a homeless shelter.

Abor Village is a joint project between Blue Sky, a Tampa-based affordable housing specialist, and CASL (Community and Supported Living), a Sarasota nonprofit company.  CASL, Inc. has a successful track record of creating housing for residents with disabilities.  They manage 127 houses, duplexes, triplexes, quadruplexes and condos in Sarasota, Manatee, Charlotte, Alachua, Lee, and Collier counties.  Recently earning a unanimous approval from the city planning commission, Abor Village is 3.5-acres, located near Fruitville and Tuttle Aves.  Consisting of two buildings, the plan is for 13,500 square feet of office space, eighty (one and two) bedroom residential units starting at $600.  Forty of the units will accommodate the working class, forty units are set aside for the homeless (twenty-four will accommodate the disabled, sixteen will accommodate the chronically homeless) and the remaining space will be for office rentals.  CASL, Inc. believes so much in this project, they are locating their headquarters on this property.

For years, people fought hard against any efforts to build a homeless shelter in the city of Sarasota. They argued for an alternative project called, “Housing First,” which provides permanent, affordable housing for individuals and families experiencing or about to experience homelessness. With housing spread throughout the city, there is no single concentration of homeless individuals that anyone neighborhood has to bare.  But more importantly, the availability of affordable permanent housing for who are either on the street or one paycheck away from homelessness is how people can actually help themselves.

Blue Sky and CASL, Inc. have not been the first to say they will build affordable housing in the City of Sarasota.  Harvey Vengroff fought in vain for a long time to provide low-income housing to the City of Sarasota –  that is until the hurdles were too overwhelming for a project to bare. Now we have another opportunity for a private company to provide housing for people making $12 – $13 per hour (or can’t work at all due to an illness or a disability).  Yet, with one little flyer of false information, all of this could be gone.

So, what is it Sarasota?  Have you been jerking our chain all of these years?  It’s time to stop this nonsense and start supporting the people who want to make this happen.  Be the voice of reason. Be the voice of the people who can’t speak for themselves. Come to the Sarasota City Hall Commission Chambers, April 2nd, 2018 at 6 pm. 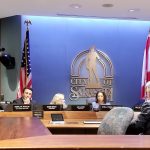 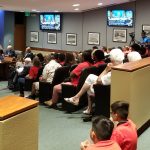 Residents in red shirts came because of the flyer. 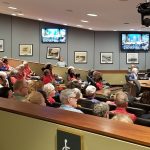 Before the meeting the room was starting to fill. 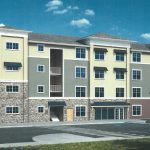 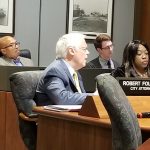 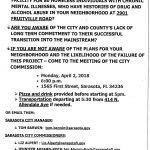 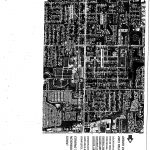 Back page of the flyer