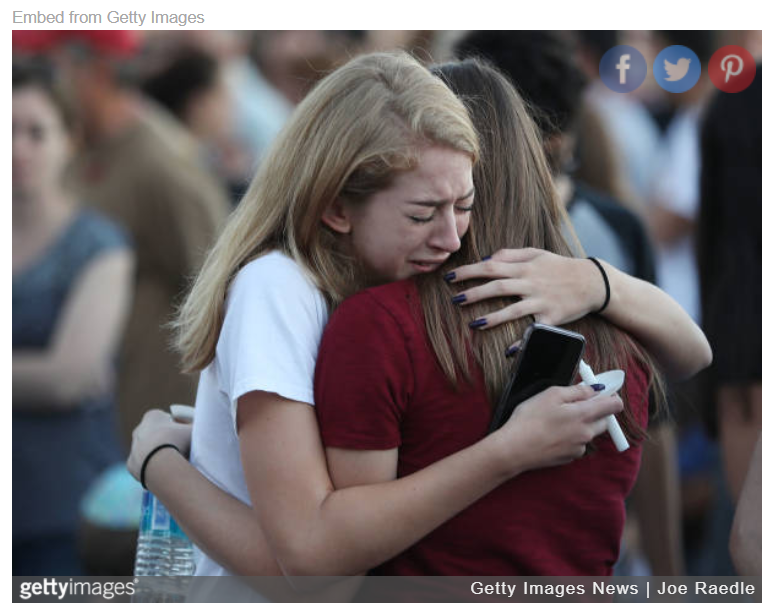 “PARKLAND, Fla. — A former student went on a shooting rampage at a Florida high school Wednesday, leaving 17 dead while panicked students barricaded themselves inside classrooms and frantic parents raced to the scene. ” – USA Today

We ask ourselves how we could have prevented the mass murder that was committed by a Nikolas Cruz, the accused killer in the Parkland school massacre where 17 of the students and staff of the Marjory Stoneman Douglas High School were shot down in cold blood and 15 were injured.  It’s the 30th mass shooting in 2018 so far.  It’s the 1,607th mass shooting since December 2012 when a gunman walked into Sandy Hook Elementary School in Newtown, Connecticut, and killed 20 children, six adults, and himself.  The means 1,846 people were killed and 6,459 wounded because we have been paralyzed by the fear of thinking that we could be responsible for these mass murders.

But the truth is – we could have prevented these murders -each step of the way.  The problem is no one wants to think the worst of people, and on the other hand, no one wants to take responsibility.

Here are the facts reported in the media. If all of this is true, we can start to see all of the missed opportunities we had to prevent this from happening.  Each of these links are worth a read.

It appears that each incident was treated in isolation.  Could something more be done if someone had taken a look at all of these reports and connected the dots of a very troubled young man? Or were people just too busy hoping that this would all go away?

“He was that weird kid that you see … like a loner,” he added.

Whether this turns out to be true or not – we have to ask ourselves how many others are going to find a home with groups like this one?

His choice of weaponry

“He purchased the firearm legally,” Forcelli said in an interview Thursday morning. “No laws were broken in his acquisition of the firearm.”

He was 19. How does someone acquire so much artillery at his young age? And where did he keep it stored? How could he afford it?  And what background check was able to overlook the problems in his life and say he is ok to purchase these weapons?

Here is a list of mass shootings in the U.S. that featured AR-15-style rifles during the last 35 years, courtesy of the Stanford Geospatial Center and Stanford Libraries and USA TODAY research:

Oct. 1, 2017: Stephen Paddock, 64, used a stockpile of guns including an AR-15 to kill 58 people and injure hundreds at a music festival in Las Vegas before he killed himself.

The Brady Handgun Violence Prevention Act (Pub.L. 103–159, 107 Stat. 1536, enacted November 30, 1993), often referred to as the Brady Act or the Brady Bill,[1][2] is an Act of the United States Congress that mandated federal background checks on firearm purchasers in the United States, and imposed a five-day waiting period on purchases, until the NICS system was implemented in 1998.

The Federal Assault Weapons Ban (AWB)—officially, the Public Safety and Recreational Firearms Use Protection Act—is a subsection of the Violent Crime Control and Law Enforcement Act of 1994, a United States federal law that included a prohibition on the manufacture for civilian use of certain semi-automatic firearms it defined as assault weapons, as well as certain ammunition magazines it defined as “large capacity“.

The ten-year ban was passed by the U.S. Congress on September 13, 1994, following a close 52–48 vote in the Senate, and signed into law by then President Bill Clinton the same day. The ban only applied to weapons manufactured after the date of the ban’s enactment, and it expired on September 13, 2004, in accordance with its sunset provision.

Several constitutional challenges were filed against provisions of the ban, but all were rejected by reviewing courts. There were multiple attempts to renew the ban, but none succeeded. – Wikipedia

“President Barack Obama recommended the now-nullified regulation in a 2013 memo following the mass shooting at Sandy Hook Elementary School, which left 20 first graders and six others dead. The measure sought to block some people with severe mental health problems from buying guns.

The original rule was hotly contested by gun-rights advocates who said it infringed on Americans’ Second Amendment rights. Gun control advocates, however, praised the rule for curbing the availability of firearms to those who may not use them with the right intentions.”

“Although the finalized white paper was leaked last year to the Washington Post, it was not known that Barnes — a lawyer who has lobbied for the National Rifle Association, a gun show trade group, and gun manufacturers — had helped draft it in the first place.”

Justice Scalia and the 2nd Amendment

DISTRICT OF COLUMBIA v. HELLER (No. 07-290). Supreme Court Justice Scalia delivered the opinion of the Court:

“Like most rights, the right secured by the Second Amendment is not unlimited. From Blackstone through the 19th-century cases, commentators and courts routinely explained that the right was not a right to keep and carry any weapon whatsoever in any manner whatsoever and for whatever purpose… nothing in our opinion should be taken to cast doubt on longstanding prohibitions on the possession of firearms by felons and the mentally ill, or laws forbidding the carrying of firearms in sensitive places such as schools and government buildings, or laws imposing conditions and qualifications on the commercial sale of arms.

We also recognize another important limitation on the right to keep and carry arms. Miller said, as we have explained, that the sorts of weapons protected were those “in common use at the time.”… We think that limitation is fairly supported by the historical tradition of prohibiting the carrying of “dangerous and unusual weapons.”

What the UK and Australia did differently after mass shootings

“But the Conservative government went one step further and banned all handguns, with the exception of .22 caliber single-shot weapons, in England, Scotland and Wales. The Labour government that followed banned the .22 caliber guns as well…After both shootings the government called a gun amnesty, compensating owners for their weapons. After Dunblane, more than 162,000 handguns were surrendered.”  CNN

Ask yourself, if you were tasked to solve this problem, how would you do it?