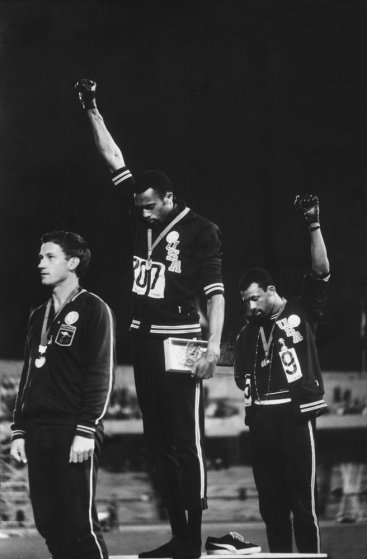 Silent Protests – Next month marks the 48th anniversary of the 1968 Olympics when two US Olympians received their medals wearing just socks and a single black glove. Their uniforms were adorned with beads and badges to bring awareness to the human rights movement. They hung their heads low and held their one-gloved fist high while the National Anthem was played. The athletes were booed as they left the field and calls to strip them of their medals went on for weeks.

Last week another athlete named Colin Kaepernick chose not to stand during the National Anthem in protest of the same human rights issues almost five decades later. As if in step, the same outrage occurred over what people saw as a disrespect to the American flag and evidence of a lack of patriotism for our country.

And for almost a month now, the largest gathering of Native Americans in more than 100 years have come together to protest the construction of a new oil pipeline across the land that they live to protect. They have been attacked with cans of mace, biting dogs and a use of force in order to intimidate them into compliance.

The list of protests goes on. And it’s not just here in America, but around the world people are standing in solidarity to fight against what they believe is unjust. From Moscow to Iran to Ethiopia, people are fighting for human rights: human rights over government rights. Because even though we expect the government to be the voice of the people, when left to its own accord, it often becomes the voice of a very few.

Although this country was born out of civil disobedience, we scorn those who do not conform, those that do not live within the lines defined by our own comfort. We label them unpatriotic, and regard them with contempt because we cannot see the importance of what they do.

It was Henry David Thoreau who believed that “the individual is the final judge of right and wrong.” In his 1848 speech, Thoreau urged people “not to just wait passively for an opportunity to vote for justice, because voting for justice is as ineffective as wishing for justice; what you need to do is to actually be just.”

We have learned throughout history that conformity breads mediocrity and compliancy breeds failure. If we stand by and watch, without any concern of our own to how we have contributed to these injustices, then we must ask ourselves: “Are we living a principled life?” Have we given away our power to someone who one day could take away our personal freedoms in hope that we will just be left alone?

There isn’t a day in Sarasota where we cannot find someone who is crying out against corruption, standing in solidarity against those who oppose us, and speaking for the ones who have no voice when it falls upon the deaf ears of our leaders. How are we any different than those of a faraway place?

In my opinion, these protesters are as patriotic as they come. They believe in this country so much that they are willing to hold this government accountable and forgo their own personal freedoms and safety. In an active form of civil disobedience, these silent protesters remind us that in the simplest of activities we should not forget what it means to be an American.