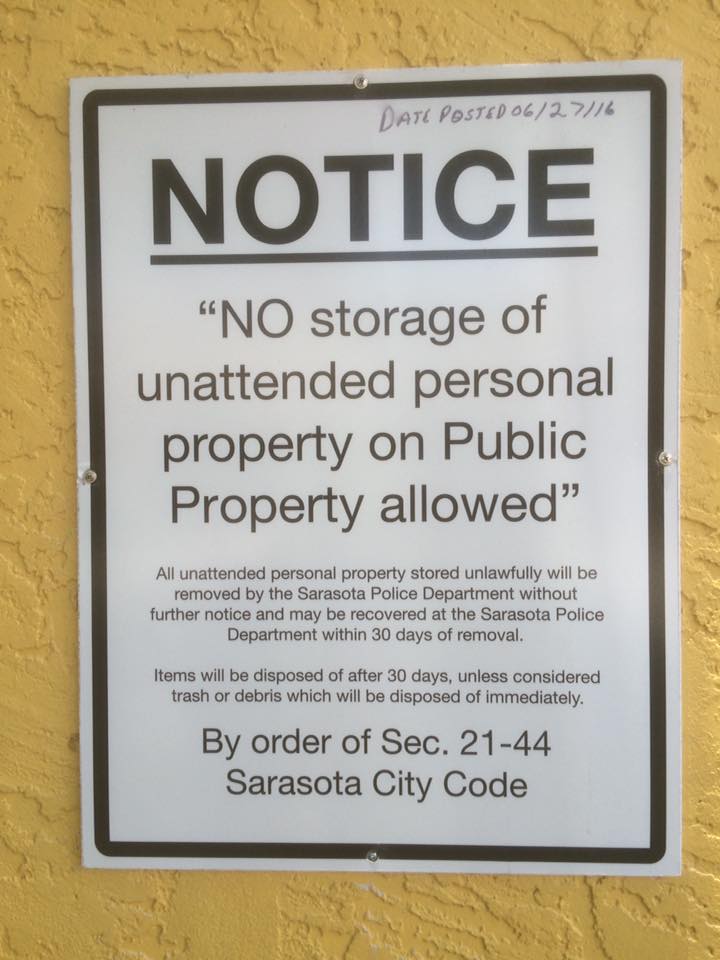 A photo was posted on social media this week that showed the bicycle racks out in front of the Selby Library. It was actually hard to see the racks themselves because they were being used to support trash bags filled with items instead of the bicycles that there were intended for. At first glance, it looked like the garbage collectors forgot to do their job. But if you actually studied the photo, what you saw were evenly placed bags secured to the rack that were actually positioned with care.

The reason that the racks were so loaded with garbage bags is because several months ago, the Selby Library placed a ban on any large or numerous bags to be brought into the library. For most library patrons, it really did not impact their time in the library. But for the homeless who use the library as a place of respite each day, it presented a large problem. But they complied and found the only place that they could find to secure their belongings—the bicycle racks.

Today, another photo was placed on social media that showed two empty bike racks with a message of thanks to the county. As of July 1, Sarasota County changed the rules of personal property left outside unattended at the all government-owned buildings, stating that it will be removed by the Sarasota Police Department if you are within the city limits and by the Sheriff’s department if you are within the county.

While most likely all passersby are relieved to see a clutter-free sight outside of the library, those of us who work with the homeless do not rejoice in the removal of their belongings. This effort is the epitome of how our local government continues the elimination of the homeless. From one block to the next, the homeless are moved around like the ball in a shell game.

This past January was the last time that we heard of an effort to build a shelter to house the homeless. And while the decision was made not to pursue any of the three properties that were under consideration due to costs, seven months later to the day, it really feels like our local government just gave into the vocal minority who have solely focused on just getting rid of the homeless. Short-term solutions that only service those more fortunate are what we witness day in and day out in our community.

At one point in time, we championed the County Commission for being the people who put on their big pants to take on the long-term solutions of the problems of the homeless. But now they have faded into the over-crowded background of people who are hoping that someone else picks up the baton.

With temperatures soaring into the category of “feels like” 103 degrees outside, just where are the homeless supposed to go to seek relief? And where are they supposed to lay their head every night?

Good for you Sarasota. In a microcosm of problem solvers, all you’ve been able to accomplish is pushing the problem onto the next unsuspecting neighborhood who will be as equally unprepared to handle the issues of homelessness as you are.