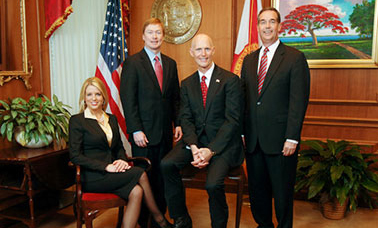 Florida is one of only three states with a lifetime ban on voting if you are convicted of a felony.  Any felony.  Not just rapists and murders, but people with felonies because they purchased cannabis, trespassed on posted commercial horticulture property, manufactured or delivered drug paraphernalia, sold used goods as new, failed to obtain workers’ compensation coverage, a tenant who removes property upon which lien has accrued with the value of more than $50, and even someone who has failed to maintain or deliver pedigree papers have to join the 1.6 million Floridians who cannot vote. The list goes on.

This past April, a Florida eighth-grader was arrested on cybercrime charges after he gained unauthorized access to his teacher’s computer and changed the desktop image to a photo of two men kissing. The password was his teacher’s last name. He accessed no other information on the computer. But an offense against a computer system and unauthorized access is a felony. If he is found guilty, he will be listed as a felon and lose his civil rights as a citizen of the United States.

On March 9, 2011, Gov. Rick Scott changed the law where the clemency board automatically restored the rights of all nonviolent offenders who served their time. That law created a 5- to 7-year waiting period before an application can be sent to the clemency board.  Then there is a 6-year application processing time, which makes the total waiting period 11 to 13 years. (A single speeding ticket during that time can disqualify the applicant from clemency.)

The Clemency Board, which consists of four people: Gov. Scott, Attorney General Pam Bondi, Commissioner of Agriculture and Consumer Services Adam H. Putnam, and Chief Financial Officer Jeff Atwater, meet four times a year for eight hours. During the four years of the previous administration, Gov. Charlie Crist granted clemency to a total of 155,315 non-violent offenders.  During the first four years of Governor Scott’s administration, clemency was granted to 1,534 non-violent felons. As of December 2014, there are 20,005 pending applications. And the last data reported shows that number of people who are granted clemency will fall to under a hundred this year.

Data from the clemency board’s own investigative arm show that one in three people released by the Department of Corrections ends up committing a new crime. However, “when civil rights are restored, the number drops to one in nine.” The data also shows that an individual has less than 1 percent chance of having his or her rights restored.

There is a petition being circulated by Floridians For A Fair Democracy asking for a constitutional amendment to be put on the ballot in 2016 that will grant non-violent offenders automatic restoration of voting rights. The ballot summary reads: “This amendment restores the voting rights of Floridians with felony convictions after they complete all terms of their sentence including parole or probation. The amendment would not apply to those convicted of murder or sexual offenses, who would continue to be permanently barred from voting unless the Governor and Cabinet vote to restore their voting rights on a case by case basis.” The ACLU of Florida and the Unitarian Universalists have also joined forces, along with Desmond Meade, president of Restore Rights Restoration Coalition. Meade, who finished law school but cannot take the bar because of his felony conviction, is one of the many examples of why clemency needs to be granted to non-violent offends and a second chance needs to be given.

SRQ Daily Columnist Susan Nilon is the president of Florida Talk Radio and owner of WSRQ Radio. She hosts The Nilon Report on WSRQ Sarasota 1220AM/106.9FM weekdays 4pm-6pm. Email her at susan.nilon@gmail.com.