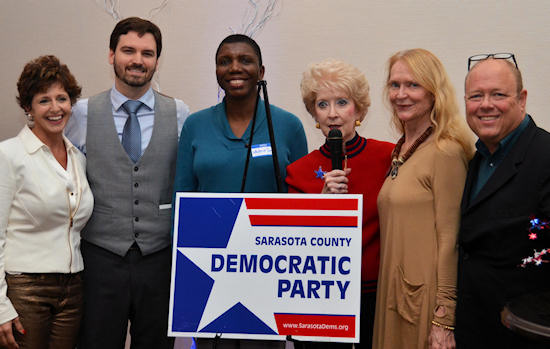 Emails and conversations have been meandering about the Sarasota City Elections that stemmed from an interview that I did with Sarasota Democrat Party Chair Christine Jennings and Treasurer and former Chair, Rita Ferrandino.  It is in those emails that fellow Democrats took to task the fact that the local party is not supporting another fellow Democrat, Commissioner Susan Chapman.

The indignation comes with the rationale that Commissioner Chapman has been a lifelong Democrat and she deserves the party’s support.  But I disagree. Having a “D” on your voter registration card does not give you a pass.  At least not in my book.  You still have to be accountable.

And what is the big issue that the Dems have decided to pull their support of Commissioner Chapman since she is not actually running a campaign right now?  The Democratic Party feels that Commissioner Chapman has been given a blank check to pay for her defense in personal Sunshine Violation lawsuit with the taxpayer’s money and she is not being fiscally responsible.  And who gave her that opportunity?  The two commissioners that she voted to appoint to the City Commission, Commissioner Eileen Normile and Commissioner Stan Zimmerman, did.  The same two who are now running for election on May 12th.

Over a year ago when Commissioners Paul Caragiulo and Shannon Snyder voted to not continue to pay fellow Commissioner Chapman’s legal bills, I wrote a column voicing my concern about the message it would send to any “would be” candidate.  I was afraid a candidate might be concerned about being at risk of financial ruin if they found themselves embroiled in a personal legal battle as an elected official. However, my fears have been coiled with the several elections that have passed and no shortage of candidates to be found.  In addition, it is my understanding that insurance is now required for elected officials to carry in order to defend themselves if this was to happen to them.

When I asked Commissioner Chapman what her legal bills amounted to, she replied, “I don’t know.”  I am still befuddled by that answer.  Do I actually believe her?  On one hand, it serves a purpose for her not to know.  A willful ignorance puts her in a position to give a truthful answer and not have to defend the amount of taxpayer money being spent by her attorneys.  The other purpose it serves is to keep it from being used against the candidates that she supports in their election.  The Sarasota Democrats have made this issue a reason to support Liz Alpert and Shelli Eddie for City Commission in this election.  Would knowing that Chapman’s legal defense fund is high in the six figures be used against Normile and Zimmerman, yes it would.

The question I still have is why Commissioner Chapman feels that as a commissioner, she is not obligated to keep tabs on her expenditures?

As a taxpayer, I want to know what the costs are.  And I think not just Commissioner Chapman, but all of the five commissioners have an obligation to ask on a monthly basis for an accounting of the costs.  And yet, it has been since last November when Commissioners Zimmerman and Normile gave a passionate speech about sticking up a fellow commissioner, we still don’t know.  Or at least, the public does not know.

You may argue that Commissioner Chapman has a right to her privacy when it comes to her personal legal battle.  And if we weren’t paying for it, I would have to agree.  But this legal battle is something that we are paying for.  And the commissioners are accountable to us.

Is this good government? No.  It is self-serving and the Democratic Party is calling out one of their own.