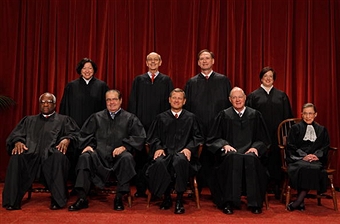 Reprinted from the SRQ Daily

Alexander Hamilton wrote: “The interpretation of the laws is the proper and peculiar province of the courts. A constitution is, in fact, and must be regarded by the judges, as a fundamental law. It therefore belongs to them to ascertain its meaning, as well as the meaning of any particular act proceeding from the legislative body.” – Federalist Papers #78

It was only a week ago that Representative Julio Gonzalez, R-Venice, and I debated the merits of his House Joint Resolution 121 (HJR 121) that proposes the creation of Section 22 of Article III of the State Constitution. It provides for legislative review of a judicial ruling declaring a legislative act void. It goes on to say: “Any law, resolution, or other legislative act declared void by the supreme court, district court of appeal, circuit court, or county court of this state may be deemed active and operational, notwithstanding the court’s ruling, if agreed to by the legislature pursuant to a resolution adopted by a two-thirds vote of each house within five years after the date that the ruling becomes final. Such resolution is exempt from section 8 of this article and shall take effect immediately upon passage.” It finishes with, “the resolution is not subject to veto by the Governor and takes effect immediately.” Rep. Gonzalez has also penned House memorial (HM 125) for the federal level judges under the same premise. If approved in the 2017 Legislative Session, it would allow lawmakers to put the issue on the ballot and ask the people to amend the state Constitution.

In a court case resulting in an unwelcomed ruling, it’s easy to conclude that a political slant is what skewed the logic of a particular decision. That conclusion is reached because everything else fails expectations. The term “activist” judge peppers the argument in support of the conclusions and heads nod in agreement. We can accept that a judge is biased because of our own bias. We assume that everyone is motivated by their politics because we are. And yet, we long for the day when a judge leaves the bench in order for the President or Governor of our liking to appoint the “proper” judge who is aligned with our own political bias. What we really want is a judiciary that reflects our own ideology.

As a student of law, I have come to appreciate the process in which a judicial decision is made. We cry for judicial review, but we fail to recognize that the legal system has it built into the process. From the District Court to the Appellate to the Supreme Court, all levels provide the accountability that is needed. The escalation in the number of judges at each level higher makes the challenge even more difficult for an attorney to convince the panel to rule in their favor. The fact that no judge wants to be overturned will have them spending countless hours researching and writing an almost perfect justification for all to read and to hold them accountable. If only the legislature could be governed the same way.

James Madison wrote: “The accumulation of all powers legislative, executive and judiciary in the same hands, whether of one, a few or many, and whether hereditary, self-appointed, or elective, may justly be pronounced the very definition of tyranny.”

This legislative overreach is far more than wanting to reign in the judiciary. It will warp our state and federal constitutions into an unrecognizable impersonation creating an unprincipled forgery. It will cut the judiciary off at the knees and undermine all its authority. It will give total dominion to the legislative branch and allow them to govern with no checks and balances. If the legislature does not like being overturned by the courts, then I have an alternative for them: “Work harder at your job and write laws that will uphold our constitutions.” That is the people’s will.